Yawning Can Be Dangerous

I firmly believe that when it is your time to die it will happen. There is no bargaining, no escaping, no putting it off for later. No matter what you do or where you go, when it is time the universe will make it happen. I joke and say that life is a terminal disease, have fun 'cause no one makes it out alive and by all means enjoy it while you got it 'cause you sure can't take it with you. This belief of mine is not morbid-really it's not. Unless you think finding stories of strange deaths morbid. 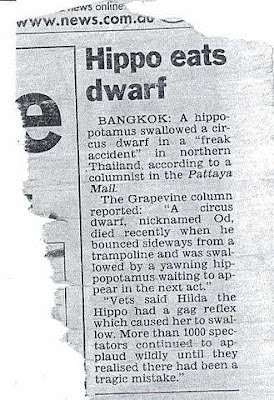 Okay, it's morbid-but it's a little funny too. Admit it, you chuckled just a bit. I think I'd rather end up swallowed by a hippo than lingering in a nursing home with my mind mostly gone, a body too frail to move and only habit keeping me here and breathing.
My great grandmother died in her bed at 103, her husband-my great-grandfather ended up strapped to a bed in a nursing home to keep him from wandering (he wanted to go home to his wife, I think it just took him awhile to figure out where she had gone and how to get there-he was 98[yes, she was older than him]). Both grandfathers gone, one -after surviving (and largely recovering from) a catastrophic aneurysm rupture that should have killed him 40 years ago, suffered a stroke and died of pneumonia in the hospital. The other chose to die of cancer and later, his wife, my grandmother chose to starve to death in a nursing home.
Most of these people as far as I know, LIVED. They didn't muck about much wondering why me or what now. My great grandparents planted their garden one year with zinnias because they wanted to see what a half acre of flowers would look like in bloom. My paternal grandparents traveled North America in a camper because they wanted to experience every moment of the journey and every place they went. My maternal grandfather never gave in to his disability and had more fun with his grandchildren than any other man of his generation I have known.
This stuff is on my mind because Big Daddy D's grandmother fell and broke her hip a couple of weeks ago now. She is 94. She won't heal. There is currently no cure for old age or alzheimers. I don't know her, her life. I don't know if she lived.
As we wait for her time to run out here on this earth I just know one thing.
I want to live and do it loud, experiencing every moment while it lasts and whether I end up in a nursing home or a hippos stomach...I know it will end when it's supposed to and I am not afraid of that.
Posted by Brook at 12:09 PM

Are you guys getting better over there?

We may need to get you a high tensil strength bed then. May I suggest some over head mirrors for your amusement?

thank you for reminding me... I needed that :)

I need it every day, the reminding. It is too easy to get caught in minutiae, lost in fear. Courage enough to say "Fuck it, this is me!" is hard to come by. I search for it every day.

I''m going to take up para sailing or sky diving when I get to old to dance. I'm not much on predestination though. A boy I dated used that "when your time comes your out of here" excuse to drive like a maniac. He died in a car wreck at age 20.

Spellbound-there is a difference between living out loud and living stupid. I'll never "get" young people dying, never.