If you hit a butterfly with your car and it stops flapping it's wings in North Carolina, does it stop bad weather in say...Peru?
Posted by Brook at 3:00 PM 2 comments:

We actually felt a little bit of that Virginia earthquake.
It was a strange experience.
I knew right away what it was.
Way up there on the "Weird-O-Meter".

Pants hitched up.
Belt tightened one more notch.
It's good.
Posted by Brook at 6:03 PM No comments: 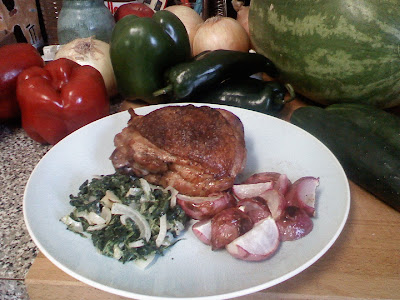 Turkey, radishes and spinach.
Roasted Turkey Thighs
(this one takes some time but it is WORTH EVERY MINUTE!)
Preheat oven to 350 degrees.
Put your biggest skillet over medium high heat and add a spoonful of bacon fat(you save yours don't you?).
3lbs turkey thighs-this meant just 2 thighs when I was at the store(those things were HUGE).
Salt, pepper and sprinkle with ground sage the skin side of the turkey thighs.
Put turkey thighs skin side down in skillet until really brown-between 5 and 10 minutes.
Turn the thighs over and place the skillet in the oven.
Roast for 2 hours.
Remove from oven, let rest for about 10 minutes.
After you have the turkey in the oven:
Roasted Radishes
1 large bunch of radishes or a biggish bag of them if you prefer.
Remove green tops from radishes-you can save these to add to the spinach later if they are in good shape.
Rinse radishes-and greens if you are using them-and cut in half or quarters depending on size.
Place in single layer in a roasting pan and drizzle with olive oil and sprinkle with salt.
With about 40 minutes to go on the turkey place the radishes in the oven alongside.
If they aren't browned, when you take the turkey out just turn the oven to broil and let the radishes brown while the turkey rests-DON'T FORGET THEM!
After you have the turkey and the radishes in the oven:
Creamed Spinach
1 box frozen spinach (and the radish greens if you decided to use them).
1/2 onion thinly sliced.
1/2 cup heavy cream.
Defrost the spinach and squeeze out all the water that you can.
Saute the onions in a little olive oil until limp(stir in the radish greens and cook til wilted if you are).
Add the spinach and when it's warmed through stir in the cream.
Grate in a little nutmeg and sprinkle on a little salt.
Stir til it almost bubbles and it's done.
Everything is ready now so fill your plate and eat up!
If you feel like amping it up a bit spoon some of the rendered fat over the crispy turkey skin and make it glisten while boosting the flavor. You could also make a great pan sauce with the delicious brown bits by deglazing the pan with some white wine, stock or other liquid of your choice after you've poured off most of the fat. If you're feeling super daring save the strained rendered fat for frying an egg in or adding to some veggies or even heating up your leftovers in tomorrow. Trust me it is SO GOOD.
*the leftover spinach made an awesome omelet today!
Posted by Brook at 5:47 PM 1 comment: