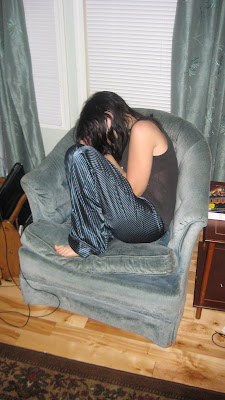 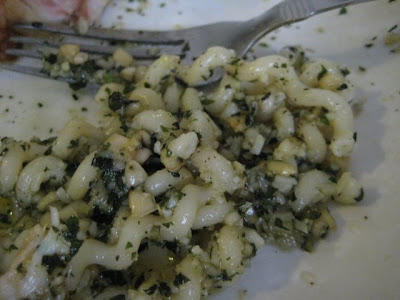 In other news I made the absolutely most delicious wonderful awesome throw together simple supper in the history of throw together simple suppers.
I had initially planned a home style chinese supper but at the grocery decided I really wanted one of the rotisserie chickens and made an executive decision to put the pork on hold til supper tonight.
I had a nice bunch of fresh basil, pine nuts in the freezer, some parmesan and half a pound of fusilli.
I had a plan.
I had never made pesto before and so I began a cookbook and internet recipe search and settled on this pesto recipe from a blog I follow(she is a largely vegetarian/vegan cook/author and has some really wonderful ideas, but being an omnivore I look elsewhere for protein recipes).
I started chopping:
3 cloves of garlic
1/2 the basil(leaves only)
added and kept chopping:
1/2 of the 1/4 cup raw pine nuts
the rest of the basil
added and kept chopping:
the rest of the pine nuts
3/4 cup grated parmesan
and kept on chopping til I was chopped out.
Then I scooped this huge chopped fine pile into a bowl and started to cover it with olive oil.
My small stoveside bottle ran dry but I am a pantry stash girl so no worries, and went to my cupboard.
What the hell? It was bare.
I RAN OUT OF OLIVE OIL!
Enter random babysitting duties for Minion #1.
Out to the store and back in a flash I came to finish the pesto.
A taste revealed that it needed salt so I sprinkled on about 2 teaspoons of grey sea salt and gave it a stir.
The fusilli I broke into thirds before dumping it in the salted boiling water.
10 minutes later the pasta was done and dinner was served. 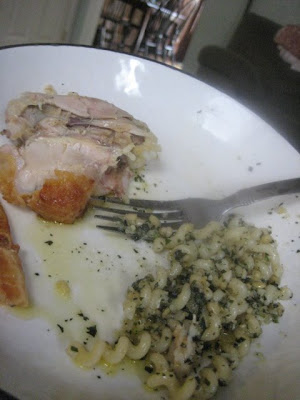 I barely stopped myself from devouring this when I remembered at the very last minute that a photo record of this awesomeness might be in order.
Posted by Brook at 9:52 AM

Doesn't it just suck when you run out of a staple you just KNOW you have on hand!

I can't believe you made pesto by hand! Holy crap. Impressive. I might have to get you a food processor for your birthday.

Huff Daddy-I do have a mini food processor, that is the beauty of the whole thing. And you know what-unless I need to have pesto in 2 minutes or less(and let's face it, that'll never happen)I will continue to do pesto by hand. It is incredibly better-there is no comparison really. Worth every minute and really-including the 20 minute trip to the store-this took maybe 35 minutes. So 15 minutes tops.
And Running out sucks-that is why I have 3 bottles of ketchup, 2 mayo, relish, huge soy sauce, jelly, Oh God the list goes on. And now I'll end up buying it the next three trips, this memory will be so strong. Oh well.
And fyi I wouldn't turn down a full size food processor, I just wouldn't use it for pesto :)

#1 I'm glad I read this after lunch, and not before. I probably would have eaten everything in sight!!! That looks WONDERFUL!!!! Send me some in the mail, would ya?? :-)

Nej-#1 It is so insanely delicious if I could mail you some I would-believe me-maybe dry ice and a cheap styrofoam cooler duct taped and overnighted-must ponder.
#2-It's funny but true. She is my slave and may just end up peeling me a grape
#3-$500-yes and this is why she is my slave.

Well I'll just have to try chopped pesto sometime. Good practice as that is how one would do steak tartare.

We have a 500 for $5 plan on our phones..or something like that. I'm not even sure what the going rate on text messages is these days.

wow that's A LOT OF FREAKIN texting! your girl is a popular girl!

I am a way I have to say, I am happy I didn't grow up in that ear on phones and texts.

Plus, well, i was a very asocial kid anyway.

oh and what? am I supposed to be impressed by your culinary prowess? you ALWAYS cook incredible meals!


What is wrong with me today?

HD-just do it-it is worth it! And steak tartare? I know many people love it(my mom confessed to occasionally eating a bite or two of raw hamburger back when the butcher made it fresh cause it smelled so good)
Nej-Those #'s are easy to do if you text back and forth every 2 minutes. Oh yeah. She f*ing sits here in the evening texting back and forth-I told her to frickin talk to them or give me the phone. End of story.

LOE-I was never that popular-I would have felt even more unpopular not running up a huge texting bill.
IIIII-see I can be selfish too-it's no big deal. I'm here nearly every day being all about me-Thank You for reading-and adding a new perspective cause I need that too! And the food-I don't need you to be impressed-I just want you to want to come eat with we!

I adore pesto, and the number of things you can substitute in making it. You're a genius.

wow, that is a lot of texting... not that much comes out of my mouth, much less on text...

I like to use pistachios instead of pine nuts, but that's probably not a good idea right now.

You could get her a Go phone and then she can only text if she has the cash.

CEO-I LOVE PESTO! I can't believe it took me so long to make it-I grow my own basil in the summer, I mean, come on! And yes, I am a genius though often in a Wil. E. Coyote kinda way.

HD-If we could take her phone back to the store we would. Pay as you go would be an excellent teaching device. We are just now this second looking into some form of this. Thanks!

in the summer when Basil grows fresh in my garden I make tons of pesto and freeze it in little cubes to take out all winter long for cheap deliciousness. It makes good salad dressings and vegetable toppings at my house but since I avoid carbs I never get to have it where it should really be, on pasta.

The minion looks so dreadfully unhappy it makes me sad. I managed to wrack up 1000 minutes of text and talk last month myself but my plan is all inclusive. I'm thinking you might want to look into something like that for the poor dear. You might guess I'm a bit of an indulgent mother.

I grow basil year round indoors. What a great idea freezing pesto! !! And here I've been freezing the basil.

Spellbound-I am normally quite an indulgent mother though usually my indugences are way less expensive. But I like to think that I am not an easy mother, I would rather help her learn a few things now rather than that old 2x4of life whackin her upside the head later on.
Gonna be freezing some pesto this summer, believe it. I love my new freezer.
HD-I know-she's brilliant!

Dude. That's the funniest post I have read in a long time.

Minion duty is on. I have some work for her too, so send her over anytime. ;)

Ulli-If we couldn't laugh about it murder would perhaps have occured-or bread and water for a couple of months. As it is debtors prison of sorts is in effect.
I may need to start a minion service-it's seems to be a popular idea!

Oh, and the miserable picture? Taken Christmas morning shortly before she was majorly indulged with a very expensive marker set-an artist needs the proper tools and all that.