Because that's what Easter is all about... 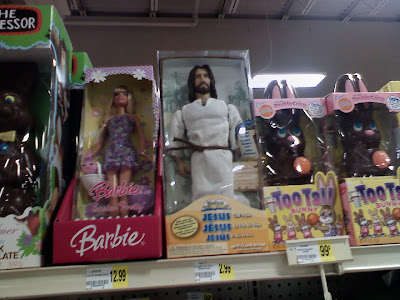 Ok, Ok.
I moved the Jesus doll beside the Barbie. They were meant to be together don't you think? Though Barbie may be rooting for the tall dark and chocolate professor on the other side. Or heck, maybe she wants 'em both. She could be freakier than we ever knew. Or maybe it's me that is the freaky one since I took the picture and made up the nice stories to go with it. I will keep my imaginings to myself this time. You make up your own.
I hope you can hear me laughing right now.
I am also enjoying my super clean house right now. Suddenly I feel a little free-who knew that knowing there was dust lurking in corners was weighing me down.
Watching these ladies work took me back to my days working on the dude ranch in AZ. I was a maid there, making beds and scrubbing toilets. Gosh, I was all of 19 when I did that.
Ya wanna hear how I ended up in Arizona? It is a twisty tale so buckle in.
Technically an 18 year old can't run away from home but that is essentially what I did. I was attending a small local college and had recently gotten engaged to a young German fellow who I had realized terrified me. There is a bit of a story there but let's just say if I had gone back to Germany with him I would be typing this from the grave I am sure.
So I did the only thing any sane young woman would do and cleaned out my checking and saving accounts -a whopping $500 I believe-drove to a bus station in a neighboring town dropped my dad's truck keys in the mailbox and bought a ticket to Tulsa Oklahoma.
You guys would have done the same, right?
I had dreams of finding a cowboy and falling in love and riding across the range forever(I had a thing for Sam Elliot-still do-that man's voice well, I'd love to "talk"to him on the phone=} ) .
The romance of youth.
Instead I ended up accidentally leaving my teddy bear and favorite boots in a hotel room-what you guys don't travel with your teddies?
Hush now, I still have a way to go with this tale.
With no cowboys turning up in Tulsa I decided(after only 2 or 3 days)that I needed to move on to a smaller-and cheaper- city. Enter Muskogee Oklahoma, located right outside the Western Band of Cherokee's Nation. If I remember right, I decided to turn my attention to snagging me an Indian boy and hey, I am 1/16th Cherokee anyway right?
It was in Muskogee that I discovered temp agencies and can't tell you how grateful I am for the ladies at Kelly Girls who took me under their collective wings. They made sure I had work and helped me find a safe place to stay. They invited me into their lives and, looking back, watched over me until I found my feet.
Dovey and Carmen, wherever you are, Thank You.
I worked at a Coca Cola plant on the Gatorade line-this was when they still used glass bottles- and have not willingly had a sip of Gatorade since(so glad it wasn't a Dr Pepper bottling facility). I worked at a jelly company and at Bush's Best canning factory. If you are going to buy beans or vegetables in a can-BUY THE MOST EXPENSIVE ONES YOU SEE! Seriously. The Bush brand itself is fine too. I worked a few other jobs there, as a nanny, and also a finisher of furniture at a local BareWood store. I even took a job for a brief period of time as a door to door salesperson selling cleaning supplies and made it as far north as Wahoo Nebraska before I got sick of it and got my free bus ticket home-well back to Muskogee anyway.
All this and no cowboys or Indians!
So once again I did what any sane young woman does and answered an ad from the help wanted section at the back of a Western Horseman magazine. Two, actually, and took the job in Arizona before I had heard back from the ranch in Colorado.
The Circle Z Ranch in Patagonia was and may still be a lovely place. I worked for room and board and $350 dollars a month. It was not an especially hard job and I do have some pretty good stories from the four months that it lasted.
Wow. I think I'll save those stories for another time. It's later than I thought- and even though I don't have any cleaning to do- there is still some supper to think about and get started on.
Posted by Brook at 12:39 PM

I thought your picture there was laugh out loud funny. I have a friend with a complete collection.

So was Merle truthful in the song?

Jesus and Barbie...I don't know if they're an item. I imagine some sort of trained counseling going on. "Barbie, your skirts are getting shorter and shorter. Slut Barbie just isn't going over well with the big guy. Etc, etc"

Okay, so what's Jesus doing in a 3-some with Barbie and a dark chocolate professor? Yikes!

I never got to Wahoo, NE, but I lived in Alliance for 4 months... home of Carhenge! You know, the vehicular representation of Stonehenge. Why do I have to keep explaining it? Check the blog spring of '07 for pictures!

HD-A collection of Barbies or Jesus dolls? And I don't think the song holds true anymore.
Nej-maybe it is just some counseling, I have a dirty little mind so that was not my first thought. Sam Elliot-even the Big Girl thinks he's hot, whoooooeeeee that man just makes me melt. And you know, Wahoo wasn't that bad, there were many lovely well cared for "painted ladies" and a super cool bar that had been the old drugstore. It was even the prettiest part of late spring/early summer. The job, however, sucked balls.

WG-What do I think Barbie is doing? She's the bologna in that sandwich! I have seen CarHenge-and the cadillac thing in Texas too. I love that oddball stuff!

I've got pics of Carhenge somewhere on my computer. Mot and I took off for vacation, with no destination. Stayed at Toadstool park for a night, then ended up (on accident) at Custer State Park. Heck, neither of us even know what Custer was.

We stopped into a visitor center after we'd been there a day or two. I remember turning to Mot and saying "Honey, have you ever heard of the Black Hills? Well..that's where we are." We'd already driven Needles highway, and didn't know it.

CEO-According to the photo she is going for dark chocolate, maybe next year. Door to Door Traveling Salesperson has got to be the worst job ever, below retail on the ball sucking scale. Sheltered isn't so bad, I am trying a modified version with the girls.
Nej-now that is funny. B took a trip to that whole part of the world with her grandma and great grandma 3 years ago now. I've still got North Dakota on my list of states to visit, there and Hawai'i and I will have at least set foot in each of them!