My 'nother pet( Why yes! I am feeling rather Chimpy!) 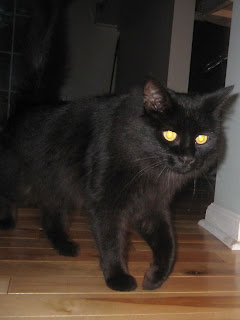 Here is Reepacheep, my sweet scaredy cat kitty.
He is so beautiful and soft. I love his dark seal colored fur and mmm, he is better feeling than a mink coat under my hand.
We were at the mall late spring of '05 and at that time there was one of those awful pet stores-you know the ones. Anyway, we always stopped there to look at the poor puppies and what do you know but some girl had brought to the store some feral kittens from her grandmothers trying to give them away. The people at the store gave her the day to try but then the kittens would have to go to the pound. The poor kittens were barely 5 weeks old and there was one fuzzy chocolate kitten so cute that I just had to hold him. He was so tiny, so scared, and so soft in my hands that my heart went out to him. I conspired with B to get Big Daddy D to agree to take him home. And conspire we did, successfully(no man can stand against the combined wiles of the wife he loves and their oh so cute puppy sad eyed 12 year old girlie!).
Now, Big Daddy D had said at some point in time that the next pet we got had to be named Reepacheep(we had read the 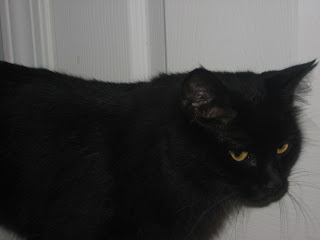 entire Chronicles of Narnia aloud to B when she was 7), and promptly reminded us of that fact when we approached him with the kitten. I think he was trying to deter us from getting any pets since B and I preferred more froufrou names at the time.
Ha! We immediately agreed to his condition and told the girl we would take Reepacheep with us. The people at the pet store put him in the nastiest,stinkiest cricket box they could find and Wallah! We had a new cat!
Reepacheep is going to be 4 this spring and I think he is the best cat ever. He has never gotten 100% over his feral beginnings, being very timid and afraid around most people. He quickly decided as a teenager that the outdoors was the place for him to be most of the time, but he does come inside for meals everyday and sits on my lap and shreds my sweaters purring like a buzz saw on a regular basis. He even lets me brush the mats out of his soft fluffiness with very few complaints. He doesn't really tolerate anyone else that much though both B and Big Daddy D will do in a pinch. He is the only pet I have ever sometimes regretted having altered simply because he is so beautiful and those genes are forever out of the pool-you know what I mean? And he would probably be much bigger and I would have liked to have seen that too. Oh well, I am still firm believer in responsible pet ownership.
Reepacheep has One True Love, Jasmine-more on her later, but she despises him. He is bigger than Opal and does a good job keeping that little doggie in check. As I type they are sharing lap space with my laptop and each other.
Reepacheep is definitely my favorite and my best kitty.
Posted by Brook at 12:08 PM

He is beautiful, but trust me, there are lots of those genes going around! I've had multiple rescue cats that are that velvety soft, sable/black/seal wonderful color and have great motors. Good for you for persuading Big Daddy D!!!! BTW, my WV is "exchamp", which is what everyone who's ever faced Chuck Norris is... if they're not just dead.

Hey, mine on yours was "liticib". Kinda funny really. And I honestly don't think I could ever have a pet without spay/neutering it-except a fish. D's parents have a standard poodle that is unaltered because it would be unmanly(read the f-in-law flinching at the thought of walking around with a dog with no balls)and it really bugs me since he is not a show dog, and will never be used for continuing the species. Soap boxes!

I thought poodles were unmanly? ;)

Apparently only the little ones are for girlie girls. And Max is actually my m-in-laws baby. Big Daddy D's brother from another mother if you will. ;D