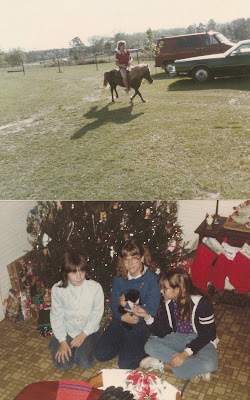 I'm trying to picture your faces when he decided to lie down and roll around in the grass. I can see six mouths dropping open in astonishment, and six pais of eyes becoming enormous in astonishment.

You need to explain to the Yankees about linoleum in the living room ;)

CEO-I think we all just kinda shrugged our shoulders and counted how many times he went from side to side-the higher the number the more valuable the horse-according to my dad anyway.
Huff Daddy-Is there an explanation for linoleum in the living room? It must be a southern thing that must be accepted, not questioned-like mayonaise bbq sauce in Alabama, and umm, the moon landing and that kind of stuff.

My guess is it is related to the perception of feeling cooler in the summer heat. Or it could be that vacuum cleaners were just to expensive down here for most people to own. I always thought it strange since most of the carpet was made in Georgia.

Huff Daddy-I am sure that is it, just like up north for a good while wall to wall carpet was a big thing for cold toesies in the winter. And I think the factory Mom & Dad worked at was making carpets.

Nej-who can argue with the logic of a bunch of kids? Mostly I can't believe Teaser didn't freak out-that is the most amazing part of the whole tale. Even my little dog freaks over the blow dryer a little. And I use it every day while he watches!

Sorry, been working this week and just found your pony surprise. I'm just country girl enough for all of this to make perfect sense to me. We were big on bathing animals back in KY. I have a picture of my mother giving a racoon a bath and a story half way written for that. Still you really can't say your county unless you've given an old Black and Tan hound dog a bath in tomato juice trying to wash the skunk smell off. Damn, good times, those were the days. Now if you will excuse me I'm off to get a manicure.

Spellbound-skunk smells abounded-though we seldom had a dog for vey long(we kids were intrepid let me tell you). I am jealous of the manicure. I think if the boots are on hold for a bit I should at least get a manicure, don't you?There was a time-actually years-until marraige-haha-that I would not have dreamed of doing without that biweekly indulgence.