Vacation Part II or The Most Fun Family Time In Years

So I decided to wait til Thursday morning to color my hair which was a silly thing. I love it as usual but my decision set us back by more than a couple of hours. We ended up getting on the road around 11:30am-way late in my opinion. But Hey-the hair looks good, tell me the hair looks good! 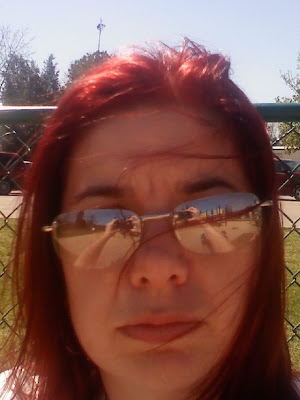 We arrived in Farmville in 5 1/2 hours-pretty good time really and Tiffany met us with smiles and big hugs. I have to confess that I was more than a bit nervous about the initial meeting and well, much to my surprise(after a bit of awkwardness and believe it or not shyness on my part) we were talking like new friends. Our dogs for the most part decided that they were content to mostly ignore each other which if any of you have dogs is a very good thing indeed! Poor Red-my kitchen fish-was just happy to be out of the car. After playing on the playground to get rid of any excess energy we went and had some absolutely delicious pizza.
Now as many of you might now I am very short and have been accused of Hobbitude. Apparently the people at the pizza parlor are in on the joke because they brought me the tiniest draft beer I have ever seen. Really. I felt like hollering out "It comes in PINTS!" Which would have been very funny except after drinking the second tiniest draft beer in the world I could not talk straight. I hate to think what 2 pints would have done.
Moving on-Tiffany has a great apartment and wonderful taste and surprise surprise we have several pieces of furniture in common. I love that we have stuff in common-real stuff. and Tiffany's mom makes the comfiest quilts to sleep under. Truly.
The next day not so early but bright(the weather was gorgeous!) Tiffany and I gabbed a bit and she made some wonderful coffee(it was sooo good) for me and then drew a map of fun things to do for the day.
We pet baby chicks-I want some bantam chickens like you would not believe, played at the park, and went to Downtown Farmville for some snackage, strolling and shopping.
I am so sorry I did not have my camera in hand and forgot about my phone's picture taking abilities. Farmville has a lovely main street with lovely iron front buildings, cute boutiques, and nice antique stores. And the second biggest furniture store in the US(Tyson[no relation] Furniture store in Black Mountain NC is a bit bigger) takes up several historic buildings.
There is also a lovely bakery, JUST DESSERTS, where it is possible to get an eclair bigger than your head! 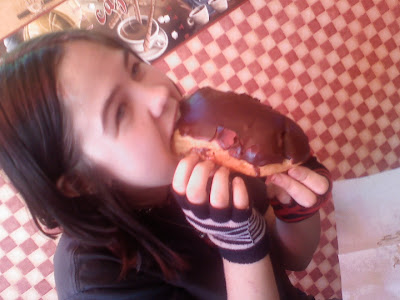 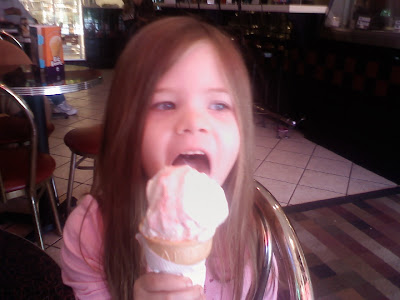 Alas I also got the dogs a gourmet treat which ended up making both of them puke. Can't win them all. The treat did not come from the bakery in case you were wondering.
Ooh ooh-and I got to help Tiffany make the best brown sugar pies-she made 8! Let me tell you they are good-I ate a piece for breakfast each morning-except Sunday(that day I just picked at the pie on the counter-yes Tiffany that was me =).
And so Saturday rolled around as they are want to do and I was awake before 7. Why can I never sleep in? I want to but it rarely happens.
Anyway after a nice breakfast and chatter and Wonder Woman and thank god no more dog vomit it was time to get things going for the Barn dance. Tiffany is sly and PB a good accomplice because somehow they managed to sneak out to transport stuff-while we were watching-and we had intended to help out with that stuff.
Don't worry though-our chance came soon enough.
We arrived at the barn and help set up tables and chairs, sort and display silent auction items and generally do whatever we were told to do. That part was fun-I hate sitting around when people are doing stuff. Somewhere along the way I decided I needed to change clothes-I am all woman that way-and after a quickish run to take care of that and get our booze-the party was BYOB!-the real fun began. The BBQ was delicious, the band was awesome and there was some cool stuff in the silent auction. I volunteered to man the bake sale and had so much fun hawking sweets it is almost embarrassing to admit. I think I did a good job with it though. And Tiffany-she was a whirlwind-making sure things were getting done and running the auction. We were both so busy we had just enough time to nod at each other across the barn a few times.
I have to tell you I was surprised by a few things at this dance.
First-No one danced! Well, when Elaine showed up she and I danced. And then our respective husbands danced with us. There were some square dancers. And some of the little girls danced with their daddy's. I was shocked-especially since lots of people had had a beer or two.
A barn dance with no dancing. It was still fun though.
Second-I couldn't believe how many people simply abandoned their kids to the great outdoors. Granted it was a farm, out in the country but cars are cars and no one(except me and two other moms)seemed concerned about the kids playing when people started leaving! I am overprotective and I am the first to admit it but surely the majority of the parents there showed no concern over their children's well being.
Third-not a shocker really-I NEED ME SOME BOOTS! I thought I just wanted some but really, I need them.
The dance wound down with me and Elaine whispering secrets in the "parking lot" with our hubbies looking indulgently on.
We helped break down the tables and chairs and stuff-that part is a little foggy as I had been pouring whiskey in my coca cola most of the evening-and eventually headed back to our diggs.
The next morning we all managed to sleep later YAY! and after plenty of catching up and gossip we went to ummm, Charlies I think, for breakfast/brunch.
OH MY GOD! THAT PLACE HAS THE BEST WAFFLES AND FRESH WHIPPED CREAM! Not a big waffle fan ever, I waited to-my everlasting regret-til I was nearly full to acquire a freshly made half piece of heaven slathered with ambrosia.
Next time I will listen to Tiffany.
I will.
And believe.
And get whatever she says is good.
Cause even though she doesn't like PB&J with potato chips on it-she does know other things that are delicious.
Eventually we had to leave and so we did.
Big Daddy D with big smile because Tiffany was as cool or maybe even better than he remembered from college(that might have some thing to do with her not holding against him the pyramid sc(am)heme he tried to sell her on back then). 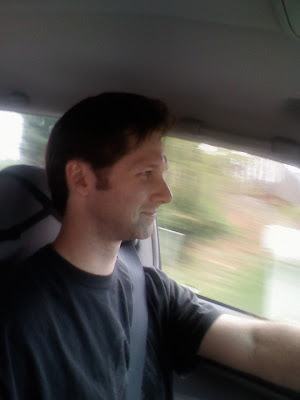 The Kid clueless as ever, happily thinking that this 5 hour trip would culminate in our arrival once again at Tiffany's house. 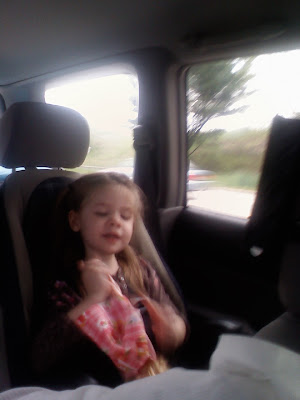 Minion #1, sad to be leaving a place where minion duties were not enforced but happy to be heading home to friends and her computer. 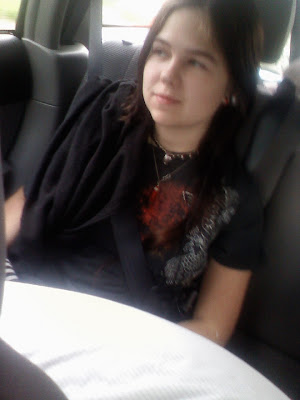 And me, tired, happy, and thinking that Tiffany is a wonderful person and that in real life too we could be friends. 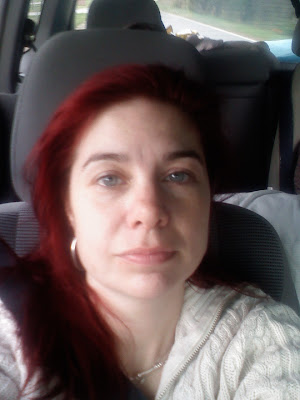 And glad to be short because I can stretch my legs all the way out on a long car trip-take that tall people everywhere! 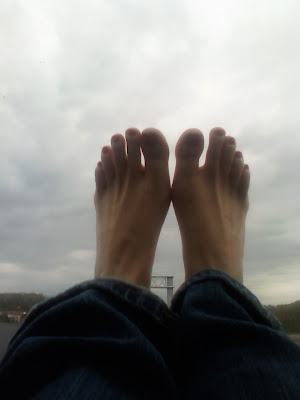 Who else is ready for a visit?
Posted by Brook at 4:47 PM

that is some saucey hair you've got going on! who doesn't love a little road trip?! enjoyed the pics and would love a honkin' big eclair right about now.

You are so much prettier IRL than in pics. Next time we get together I am determined to get a picture of your face. If you need more pics of your ass however I have them. So May 16, my place, hope you're not allergic to cats, might want to leave the dog at home.

CWG-I love the hair-thank you. Car trips-after 30+ hours with 2 kids, a dog, a fish, and a husband I'll agree they are fun but just a bit tiring. And the eclair was frickin awesome-I should have taken a pic of the waffle and the pies!

Spellbound-Thank you. And good luck-many people have tried to get a good picture of my face-it rarely happens. Please do send on a good pic of my ass though cause they too are in short supply. I will be there-no cat allergies and no doggie in tow!

It was so good to have you here! I had tons of fun. And thanks again for all your help. We got the preliminary numbers in today and stand at $5200 (thanks in no small part to your baked goods hawking)!!! We'll definitely have to make our way to Ashville soon.

WG-I am glad you had fun-we can be a bit daunting I know. I really had a great time-really truly. I will be happy to hawk pies and brownies for you any time! And you know, $5200-that is great! Bankable you know? Come to Asheville! I am practicing seeing it through a visitors eyes-it is nicer than I remembered.

A) the hair looks good
B) I too am glad to be shortish because of the leg stretching out thing
C)A Barn dance and a bake sale? What? Did you time travel back to the 1800's?

seriously-WG sounds like a fun and wonderful hostess...I want to go stay w/her a week :)Glad you had a great trip.

Your hair is gorgeous.

Now, I am totally jealous.

CEO-don't be jealous, you too can find this color at your local drugstore!

A barn dance. Haven't been to one of those in ages!! But..no one danced??? Odd, very odd indeed.

That eclair is calling my name. Next time you must get one and mail it to me. :-)

I'm always jealous of people that can stretch out and put their feet on the dash. But then again, my dad would never have allowed it based on how dangerous he said it was....so now I'm paranoid doing it myself. Darn parents!!! :-)

I am so glad you had a fabulous vacation. WG is the best, and so is Elaine, and their respective partners. They done good. As I hear you did too. Everyone says I missed out on a lot of good times!