Flowers in the Storm

(Expanded from my original response to Lyvvies blog) "Flowers in the Storm" by Laura Kinsale is one of my all time favorite books ever. I read it when it first came out back in 1992 when I was pregnant with my Big Girl. I even bought a copy though I was a poor single mom, and I read it many times but eventually it was lost what with all the moving I did. I found my my current copy in 2003 or 2004 it looks like, for some reason I think it was after Maggie died. I thought it had been more recently than that. Oh well-time zooms. I love the story. Love it. There are so many reasons to love it. The story itself, the writing, the Bad Boy, the Good Girl, it is all very engaging.
If you like romances I do highly recommend this one.
I'm not giving anything away by saying that the "hero" of the story suffers from a stroke. From the story line I would say stress and living the high life brought it on. That is of course just my opinion. Strokes have many causes, aneurysm rupture is just one. An aneurysm is an enlarged vessel in your brain, and when it ruptures it causes a stroke and is often fatal.
This is the story of my mother's father as it was told to me. I'm sure there is much left out or just gotten wrong but hey, it's what I remember. 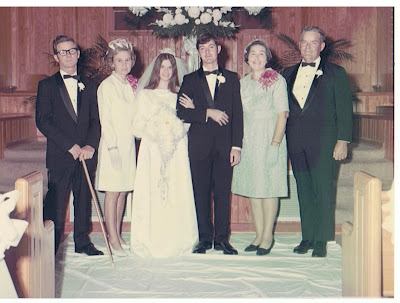 Grandaddy Hand is on the extreme left
My grandfather as a young man joined the army towards the end of WWII and decided to go AWOL for a little R&R just days before his deployment overseas. He was a bit of a rabble rouser I hear, always good for a fight, and when he and his buddies were located by MP's a bar fight ensued. My grandfather got hit so hard by an MP in the melee that he lost consciousness and stayed out for 2 or 3 days.* The military ended up doing x-rays and discovered my grandfather had an aneurysm that had NOT ruptured. Upon this discovery, and when he finally regained consciousness, he was given a medical discharge and sent him on his way with 10% benefits instead of shipping him off to war*. My grandfather married, had kids, built up his own successful grocery/produce business in Florida, owned two houses and a Thoroughbred or two and things were looking good. One day as he was making his business rounds the aneurysm ruptured. My grandfather, knowing his condition, recognized immediately what had happened and was able to let it be known that he needed an ambulance. He was only 41 and just a week away from seeing my uncle was born. by some miracle he survived the initial trauma. Sadly the hospital "lost" him shortly after he regained consciousness when a nurse, mistaking his grunts and flailing for something else entirely, wheeled him to the psych ward where he remained for, I think, a week. During that time my grandmother as I mentioned was very pregnant and giving birth-you can imagine I'm sure how much shock and stress she was experiencing. My grandfather never really talked much about that time except to say that there was no worse feeling than having your full faculties and being entirely unable to communicate and being trapped, in his own mind, in his own body and with a bunch of truly crazy people on top of all that. Granddaddy eventually recovered much of his speech and control of much of his body, though he remained paralyzed on his right side and wore a brace the remainder of his life. He died from complications of multiple strokes when I was almost 17. He was 65.
The End.
My grandfather's story is one of the reasons I love this book so much. I know first hand, well from his life, the difficulties and possibilities, the life and the love that survive tragedy. My grandmother has survived a stroke of unknown cause (the day before Maggie was born as a matter of fact)and has recovered quite well, though she too suffers from partial paralysis in her left arm.
The End End
*Another version of Grandaddy's initial injury has him falling off the back of a half-track vehicle as it was pulling an airplane onto the tarmac. I only ever heard the fight scene story but Mom has heard both versions.
*Grandma had to fight to get Granddaddy's 100% disability after the rupture. The Veteran's Administration tried to say the rupture was unrelated to the initial injury but with the help of a FL representative named Claude Pepper the Veterans Administration relented and awarded him full benefits. By the way, the Claude Pepper Highway is the main road in Chiefland near Mom's farm in N Florida.
Posted by Brook at 12:23 PM

Dad's story has always been one that slams me through the whole gamut of emotions. I really miss him - especially his stories and sense of humor.

Mom it is so funny to me that B never met him. He is such a huge vivid part of me that I was flipping through pics of her, convinced I had some of him holding her when she was a baby. I miss him too. He was the best. For real. I should know since I do have a worst to compare him too ;) Hugs!!!

HD-family stories are the best-even the bad ones tell us who we are. This one is just like supper last night, sweet and sour and richly delicious.

You should identify all the people in the picture....
I'll leave that to you.

OKAY. If you make it this far in the comments section, the people in the second photo from left to right are: Grandaddy Hand, Grandma Hand, Mom, Dad, Grandma Tyson, Granddaddy Tyson. Obviously this picture is from my parents wedding which took place October 3, 1970 in Brookfield Georgia. I was not named after the town. I was born 1 year and 6 days after this photo was taken. I was definitely a twinkle in someones' eye and neither set of grandparent's appears too happy about it. I'd of put this in the main body of my post but that appears to have disappeared on my edit page.